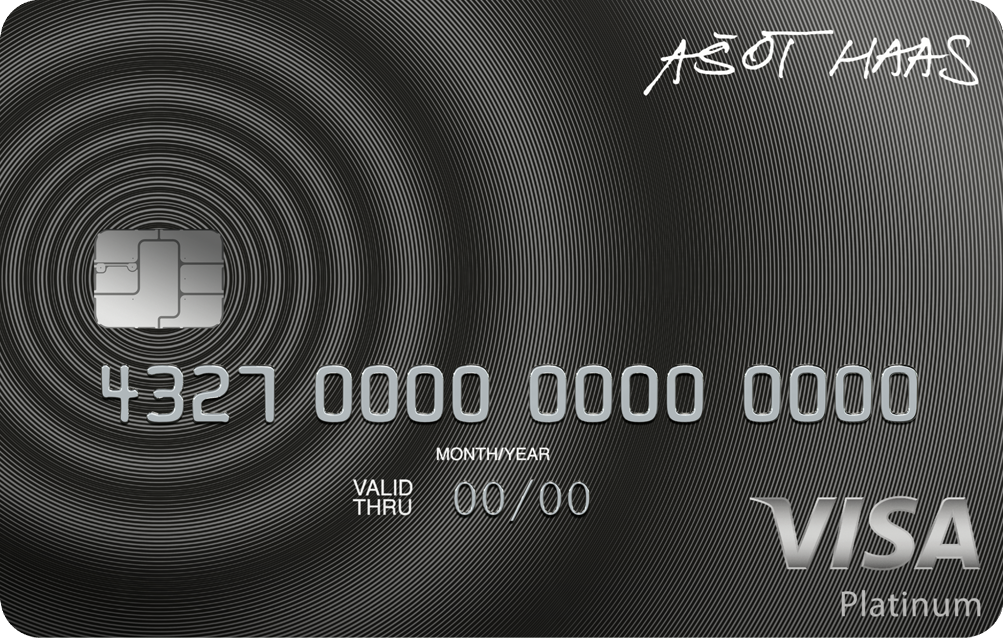 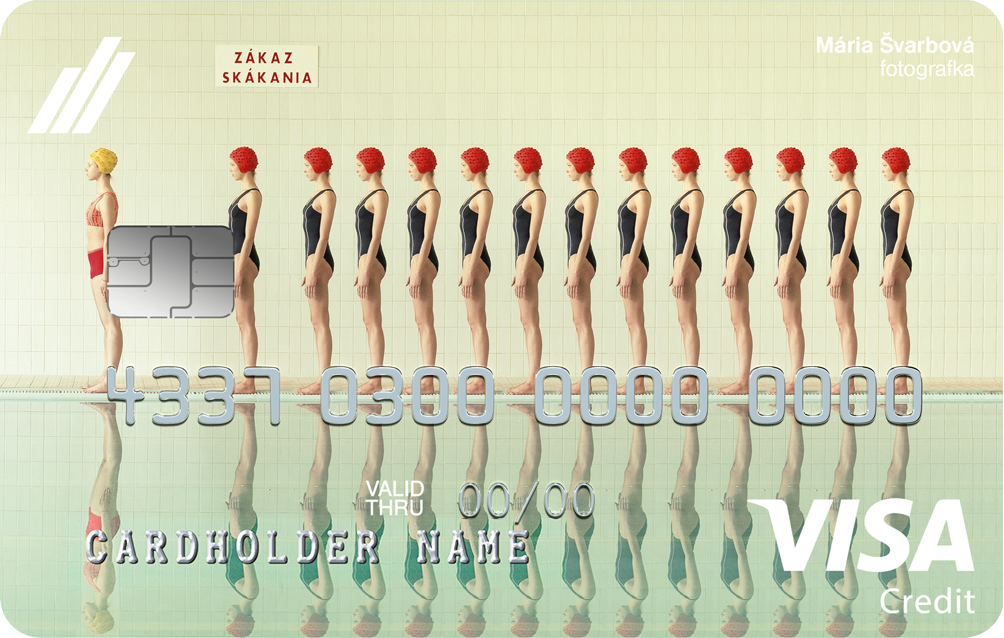 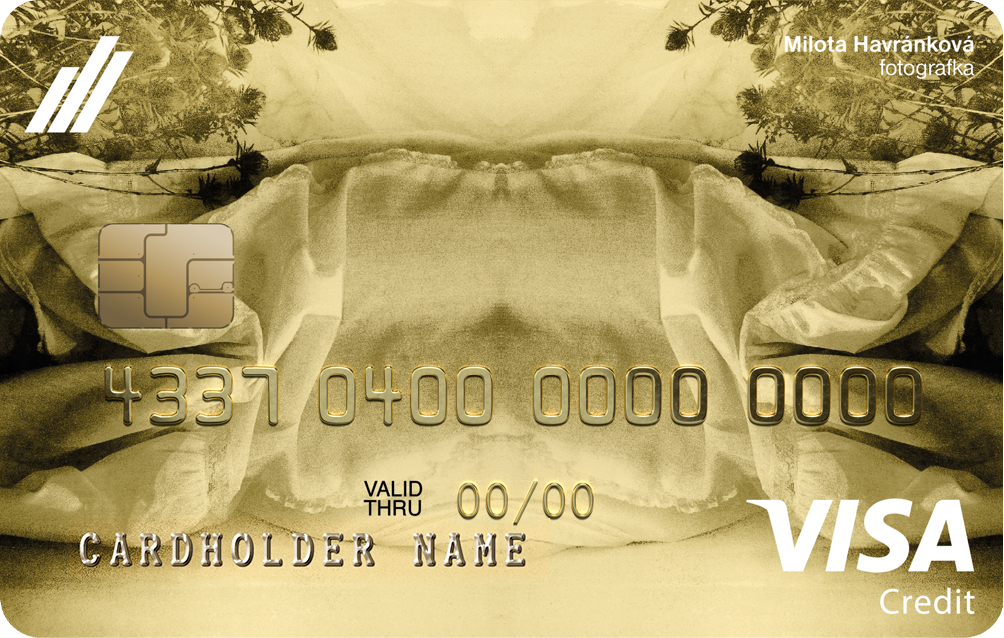 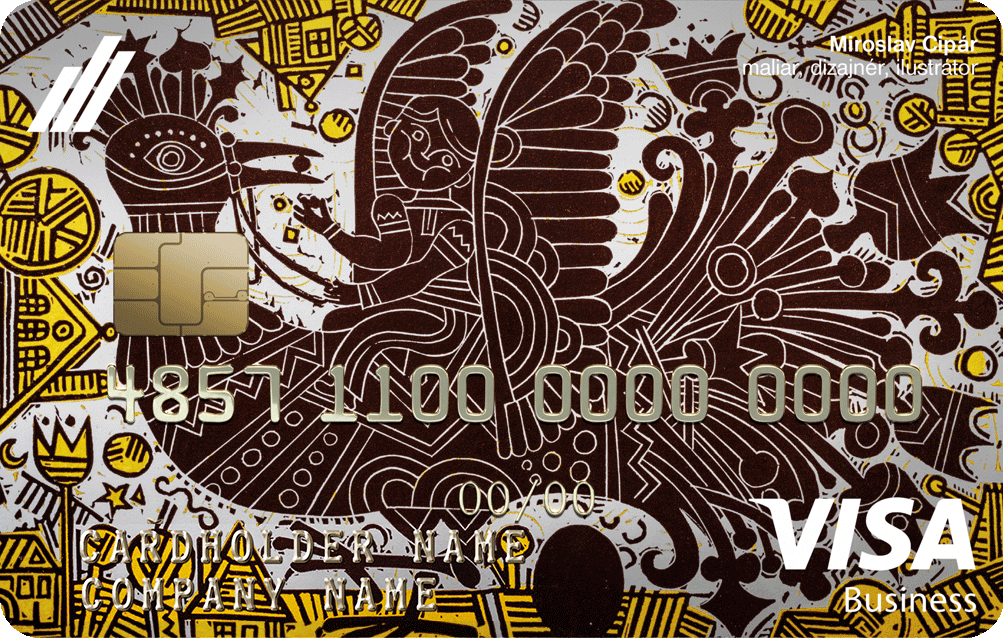 The project started to develop 10 years ago. It is a simple code similar to the Fibonacci sequence, where each digit is the sum of the two previous ones.

The artist’s effort was to create a 3D space on a 2D surface. He created two simulations, a hole effect and a sphere effect (concave and convex), which together formed a contrast.

Get the card Learn more about the artist
We want to spread smile
among people and show them
the beauty of art.

The card shows a sketch of the dress that Lukáš designed for Adela Vinczeová for the Tatra banka Foundation Art Award gala event. The main theme of the gala event was technology and Adela hosted it together with a robot. The holographic, very spectacular and colour-changing dress was created with a technical and subtly futuristic touch.

On the credit card we can also see Lukáš’s iconic label with a barcode and a combination of numbers referring to the event date.

Get the card Learn more about the artist
We have the courage to experiment
and do things differently.

The photo was taken at a swimming pool in Zlaté Moravce in 2014 and was published in 2017. Socialist-era Spartakiad inspired the composition of the girls and the overall atmosphere.

The photo captures the contrast between one standing girl and a line of similar girls, making it impossible to determine which one was the first. The photographer raises the question of origin and originality. Švarbová introduced tension at the pool’s edge where the girls are reflected on the water’s surface along with the words JUMPING FORBIDDEN.

Get the card Learn more about the artist
We want to prove that art
breaks stereotypes.

The photo is a part of photographic series of photographs called „Mýtus” which was published in 1975. The year 1975 was declared by the United Nations as the Year of Women. The main theme of the series was the fragility of women and the inspiration came from the perception of women by Slovak poets. Each photo represents a specific Slovak writer. The photo used on the card was inspired by writer Andrej Sládkovič, who dreamed of a woman he loved while actually living with another.

The photograph portrays the illusion of a soft cushion that one can dive into. Thus, Sládkovič dreamed of his beloved, whom he could not be with.

Get the card Learn more about the artist
It is necessary to bring
a change into art.

The linocut was created in 1960 as an initiative of the Slovak Fund of Fine Arts for its „Dielo” shop to meet the very high interest in art for new flats. As the author had been composing many illustrations, which is why he chose to compose a fairy-tale bird inspired by folk art.

Get the card Learn more about the artist

Please leave us your phone number and we will get in touch regarding your new credit card.
Or call *1100 right away.